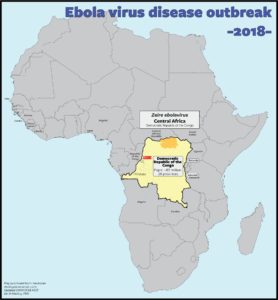 Location of the Ebola virus disease outbreak in  Ikoko Impenge near Bikoro, DRC. Click on image to enlarge. Freely downloadable from here or https://doi.org/10.6084/m9.figshare.6233540

The World Health Organization has reported that the Democratic Republic of the Congo (f. Zaire) has declared a new outbreak of Ebola virus disease (EVD). The announcement follows laboratory confirmation of the presence of infections by a strain of the genus Ebolavirus, species Zaire ebolavirus.[1,10]

Figure 2. Suspected, probable and confirmed cases and deaths in the DRC EVD outbreak.

Most cases seem to be located at the Ikoko Impenge village health facility located about 30-60 kilometres from the market town of Bikoro.[1,11] The market town is located in Équateur Province, on the shores of Lake Tumba near Lake Tumba (see the adjacent map) and has river access to other villages and the DRC’s western border with Republic of the Congo.

The outbreak has reportedly been ongoing for 5 weeks of viral haemorrhagic fever and includes 21 suspected cases and 17 deaths.[1,3] That makes the proportion of fatal cases 80% but this number is likely to change as the outbreak evolves).

Only 2 of 5 collected samples collected by WHO-dispatched teams have been confirmed (Figure 2) by the Institut National de Recherche Biomédicale (INRB) laboratory in the DRC to date.[1,9] 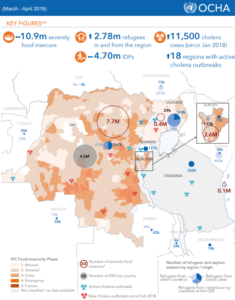 This is the 9th recorded outbreak of EVD in the DRC. It follows the announcement of their last outbreak by almost exactly a year.[2] The DRC is expert at containing EVD outbreaks but it will be worth watching the contact tracing. If travel to neighbouring regions has occurred then the chances for a larger outbreak rise.

We’re starting at 5 weeks into this outbreak.[1] We’re in the early days of a collaborative effort to characterise and contain the outbreak, but it will be interesting to read why testing for ebolaviruses took this long. Remote communities and rugged terrain are often to blame here, but even so, 5 weeks seems long.

It is now clear that the rVSV-ZEBOV Merck vaccine, used in the West African epidemic and recently shown to provide lasting protection against Zaire ebolavirus,[16,5,] is being rolled out.

Yesterday I spoke by phone with the Minister of Health of the Democratic Republic of the Congo @OlyIlunga to discuss the #Ebola response in #DRC. We agreed to ship vaccines as quickly as possible so they can be used to save lives.

To make matters worse for containment of an EVD outbreak in this region (Figure 3), there is food insecurity, refugees crises and cholera in the DRC and in neighbouring Tanzania, Rwanda and Uganda.[12] You may recall the worlds biggest EVD epidemic in West Africa was confused with cholera early on because of some clinical similarities among early EVD cases including diarrhoea, vomiting, and severe dehydration.[13]

2 thoughts on “Ebola virus disease outbreak in the DRC”