As the Ebola virus disease (EVD) outbreak in the Democratic Republic of the Congo (DRC) looks to be under control, how much the vaccine has helped remains an unanswered question. But will it be answered with hardly any new cases being confirmed? Let’s have a closer look at the timing of things. 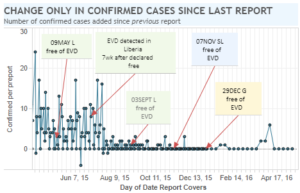 Don’t get me wrong – having this vaccine is a fabulous and beneficial addition to the struggle to contain EVD outbreaks. What happened from 2013 to 2016 in Guinea, Sierra Leone and Liberia [5] should never happen again.

But a question surrounding the use of the vaccine is whether it actually prevented cases of EVD this time around, or were the central pillars of containment sufficient?[8,11] These pillars were recently described by Médecins Sans Frontières [1] as…

#UPDATE: These are the ‘six pillars’ of intervention to contain an Ebola outbreak:
1.Early care and isolation of people who present with symptoms
2.Tracing and following up patient contacts
3.Informing people about the disease, how to prevent it and where to seek pic.twitter.com/G0dDckY3pa

These responses were certainly rolled out more quickly in the current outbreak.

What does the literature say about how quickly the vaccine protects?

In the discussion of a study of the effectiveness of ring vaccination in Guinea, the authors noted that the time to induce protective immunity using this same vaccine, “might happen quickly, within a few days or a week.” If so, the vaccine may indeed have been responsible for the slowing and stopping of confirmed cases days after it was deployed.[2,12] We know for certain that a good immune response is usually in place 28 days after vaccination.[2,12]

The DRC outbreak has been much smaller than that in West Africa. The rVSV-ZEBOV vaccine remains unlicensed requiring individual consent for each dose. Use of the vaccine in the DRC has been accompanied by ethical approval and oversight from the DRC Ministry of Health and has also been part of studies to better understand its effectiveness. Because it is unlicensed, widespread use of the vaccine has not been on the agenda and so numbers of vaccinated people are also fairly small.

Previous studies in macaques found that, if given within a short time after infection, the rVSV-ZEBOV vaccine could provide a prophylactic effect.[3,4] One of these studies suggested that protection may result from an initial non-specific innate immune response that matures into a more specific response,[3] while the other pointed to natural killer cells and non-neutralizing antibody as essential factors with day 6 after infection being a critical time point in macaque studies.[4]

If we look more closely at each of the health zones, we can see some other interesting things. 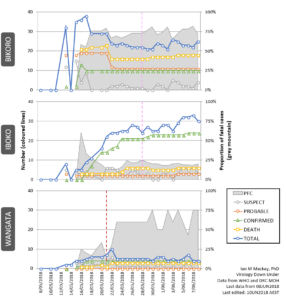 EVD case numbers in each of the 3 affected health zones. Click on image to enlarge.

The vertical dashed lines show when vaccine rollout began in the health zones. From these graphs, we can see some really interesting differences.

One difference is unrelated to vaccination. There is a very different proportion of fatal cases (PFC) in Iboko (currently at 20%) compared to Bikoro (72%) and Wangata (74%; but low case numbers). Is this low value in the Iboko health zone due to lost fatal cases, cases that could not be tested or to better care? We saw better survival rates in West African treatment units like that in the Hastings Police Training School near Freetown, Sierra Leone where more aggressive support (including intravenous fluids, antibiotics and antimalarials) was provided (h/t @AhmedTejanSie).[13]

In Bikoro, there were no confirmed cases for days before vaccination began, and there have been none since. That means we can’t tell if there was a protective effect. But we will still be able to follow the vaccinated people and determine whether a protective immune response resulted.

In Iboko there were confirmed EVD cases before and a few after. It will be interesting to learn whether those post-vaccination cases were among vaccinated people or in different transmission chains or among known contacts who just hadn’t been vaccinated yet.

In Wangata, like Bikoro, there were no confirmed EVD cases in the days leading up to the vaccination campaign, and none added since. Iboko, which also has had the highest caseload of this outbreak, may be our only hope of answer the question of vaccine effectiveness.

The outbreak slows before treatments get trialled 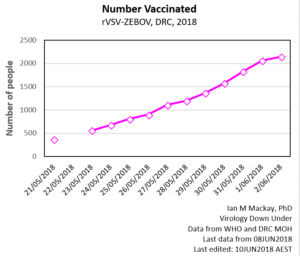 Graphing the day-by-day doses of vaccine given in the 3 affected DRC health zones. Data from DRC MOH[9].Click on image to enlarge.

Teasing out the role of the vaccine in the DRC-2018 outbreak will be a challenge and with the way things look, the need for another vaccine [6] or perhaps even for treatments,[7] is fading quickly. At least, unless there are plans by the Chinese to vaccinate their citizens ahead of the next outbreak.

Another marker of outbreak control is that vaccine administrations have slowed. Today’s data from the DRC MOH included the lowest number of vaccinations (81;[10]) since the roll-out began (averaging around 165 per day). With just over 2,100 vaccinations provided so far, it’s unlikely all of the first batch of 7,500 doses will be needed.  And the second batch certainly won’t be unless things take a dramatic turn for the worse.

The decreasing need for preventative and therapeutic drugs is a good thing for the people of the DRC since it means the outbreak is probably controlled. On the other hand, it means we won’t learn more about what could be useful in treating EVD cases before the next outbreak.

Perhaps some of these treatments will prove useful in clearing our persistent Ebola virus infections. That would certainly be a good thing. If not, then we’ll just go through this whole process again next time; hopefully, more quickly. But at least we’ll have more ducks in a row because we will have learned and planned ahead for all of the necessary steps.