Influenza laboratory confirmed Flu test data from the US Centers for Disease Control and Prevention.
https://www.cdc.gov/flu/weekly/index.htm.[1]

The United State’s (US) influenza (Flu) season looks like it has peaked according to the latest Flu report.[1] And perhaps it has. But the graphs are only as solid as the numbers that go into them. And they are a bit wobbly for a little while. This is not a criticism and it’s not a bad thing, it just is what this is.

Each week, hard-working epidemiologists and report-makers collect, collate, confirm, curate and present the numbers that provide the public – and other professionals – an idea of what is happening in their neck of the woods.

But as with all things outbreak and epidemic, we have to have the patience to see in what way the case numbers are turning. The fog of Flu virus spread is as strong as that of MERS-CoV, Ebola virus, Zika virus or any fast-paced disease transmission event. My best guess at how much time that takes is about 3 weeks.

I used an online tool called WebPlotDigitizer [2] to get an estimate of the totals shown in the CDC Flu test-positive bar graphs. I worked that out for Week 52|2017 through to Week 5|2018 and then rounded them in various ways using Microsoft Excel. 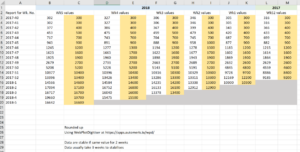 Snapshot of the interpolated Excel data I collected & used to estimate the time it takes for US CDC weekly Flu data to settle down.

That showed me that if you look at a given Week’s total, it will take about 3 more weeks before that Week’s total stops rising. These rises are presumably from newly added lab data that have missed the weekly deadline and have arrived after a weekly report’s publication deadline. This same pattern can be seen in the United Kingdom’s Flu reports and Australia’s Flu reports; probably anywhere you look.

Once again, this isn’t a problem. It’s a good thing because it means when we look back we’ll have the best data we could. These should be living documents – at least until the last tissue has been binned.

When it does become a problem is if one uses the current graph’s pattern to make an absolute statement about where the Flu season is right now. That doesn’t work. Keep the comments flexible.