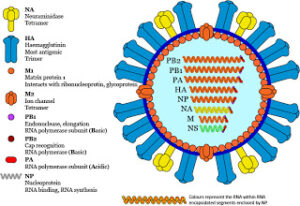 An influenza virus schematic. These viruses have multiple separate genes. If 2 different Flu viruses replicate within the same cell, a novel virus may come out. In 2017, there were noted co-infections among Queensland patients. Did any such reassortments occur?

A Mum  gives birth to a baby but she is too ill with influenza to know it.[1]

As we read another tragic story of the severe impact from disease (in some cases, death) related to Australian influenza (Flu) virus infections this season, we should be reminded just how serious the Flu can be.

The reality is that the antivirals we have are mostly ineffective at doing what we need them to do.[2] When we read that our stockpiles are running out – mostly that won’t mater. The vaccines we have – while safe, and the best tool in the box right now – can also have bad years. When the Flu virus, beyond any capacity we have to predict, simply makes a few changes to it proteins (or wholesale changes – see figure’s caption) and mutates away from the vaccine’s effective reach. This is looking like it may have played some role in what happened in Australia this year. The low vaccination rates (at 20% in some demographics [3]) are also likley to be a big contributor. For better understanding, we’ll just have to wait.

We wait as we would during an episode of any reality TV show you care to name – for the punchline to be delivered after the ad-break. In this case, after the Flu season has peaked and before any vaccine changes could hope to be made that might be useful in helping our northern hemisphere villagers. It’s not a done deal that the north will suffer the exact same strains that we have this year. But they might. Because of the time it takes to test, characterise and report what happened, predictions for slow-to-make Flu vaccines must precede the next Flu season by months.

By the time the next Flu season does arrive, we also have human populations that are partly immune to the virus that infected them last season, and so they’re less likely to fall as ill to the same strains as they did if infected again. An immune population may help drive the creation of novel variants seeking to outgrow the pressure of a host’s immune system hunting them to extinction. All normal fare, but so the maddening cycle of variables and eternal catch-up rolls on.

When you look around Australia – Flu reporting is all over the place. Some reports are comprehensive, some far less so. Some are timely (reporting one the previous week’s activity) some are weeks behind. It’s normal to sample a small percentage of Flu virus isolates to see what they are and how closely they match the vaccine viruses – but that also takes time and may be affected by the reasons for selecting what gets tested, how many are tested, what testing is done on them, and from where across this wide brown land they are sampled.

There are a few solid knowns among all this though..

You guys up north: get your Flu shot! It may not be perfect and it make take too long to make, but it will give you a very solid, safe and known chance of avoiding getting pretty sick, and making others very sick, from one of several Flu viruses circulating in your community this season. And do you know what the chance for protection is if you don’t get vaccinated at all (and haven’t already been infected by the same strains naturally)? Zero percent.

15OCT2017: Corrected a grammatical error and added a caveat to final sentence.